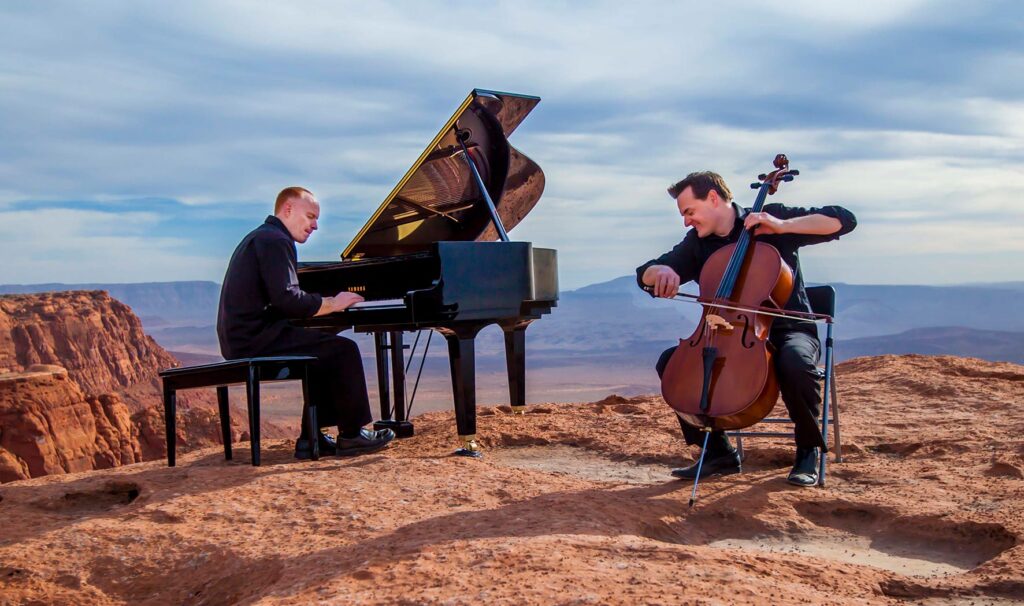 Think about musical duos, and the performers who come to mind probably depend on the decade that comes to your mind first. In the 50s, 60s and 70s, there were many successful duos on the charts: the Everly Brothers, Sonny and Cher, Marvin Gaye and Tammi Terrell, and the Carpenters, to name just a few… a few singers, that is.

In recent years, duos haven’t been quite as popular. But even today, vocalists tend to be more well-known. Instrumental duos, sadly, have taken a back seat – a situation we’re delighted to help rectify with the May 15th performance of the Seipp-Sheets Duo!

Until then, here’s a selection of instrumental duo performances to help you rediscover the beauty that two talented musicians can create.

Although Pachelbel’s Canon has become associated with weddings, feel free to enjoy it even if you’re dating or already married. This version is performed by Brooklyn Duo, a pianist and cellist.

For a delightful tribute to jazz greats Duke Ellington and Count Basie, check out this performance by Clark Terry on the flugelhorn and Red Mitchell playing bass.

For a pop song performed with a classical twist, check out this music video by the Croatian brothers 2Cellos. If you’re really feeling adventurous, you might enjoy their surprising interpretation of AC/DC’s song Thunderstruck.

The Piano Guys are another duo that plays popular tunes with classical interpretations, such as Someone You Loved. The Piano Guys includes a cellist as well as pianist, but we won’t hold that against them.

Cello and piano are clearly a winning combo in the duo world, but let’s not rule out violinists. Here’s a beautiful performance of a less-known composition by Arthur Honegger: Sonatine pour deux violons.

And for something a little more unusual, enjoy the performing the first Canonical Sonata (of six) composed by Georg Philip Telemann in the early 18th century.